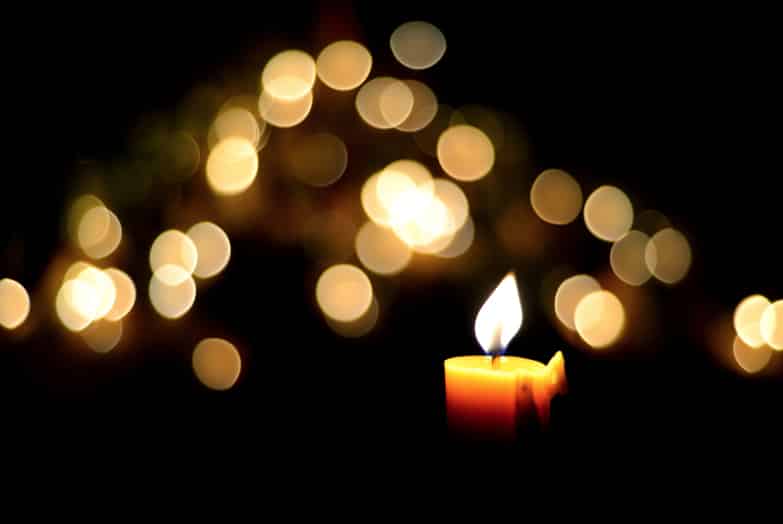 I’m one of those people who firmly believes that everyone needs a sacred space. This space is less about religious dogma and more about a physical place where you can quiet your mind, center your thoughts, pray, and just be with God.

In my case, I do best if I visit that sacred space in the morning, before I dive head first into the busyness of my day.

Think of it this way. You have spaces in your home that are set aside for almost every other particular purpose. For example, the couch in our family room is one of those spaces. It’s not a sacred space, but it offers up a little corner designated just for me. When I curl up in that little space, my mind and my body simply know that this is the time for rest.

I crave this resting space. I also crave a sacred space where I can rest fully in the Lord. It’s probably because I’m just not holy enough to pray in the backyard. I get too easily distracted by squirrels, swaying palm tress, or pretty much anything that moves. I probably should get myself checked out or something, but for now, I’m focused on how to create a sacred space within my home.

This need for a sacred space got me thinking about how I came to be this way in the first place. I’ve decided that it might have something to do with my grandmother Isabel.

I went to live with Isabel when I was about five, and she was somewhere in the range of ancient. Isabel was a devout Catholic. Even so, she only attended church for weddings and funerals. I never really knew why. I just thought it was pretty cool that she made up her own mind about how to love God.

Isabel did, however, make sure that I went to mass every Sunday. And, she was an expert at bringing the church right into our little house on Clifton Street. It was quite a sight to see and embarrassing as all get out. If there was an open flat surface in the house, you could rest assured that Isabel would eventually cover that surface with pictures of saints, religious artifacts, and burning candles. Lots of candles. We barely needed electricity in the winter months the house was so bright.

Still, Isabel taught me how to love God. She also taught me how to lose a son and what it means to hold a sacred space. For Isabel, it was a tightly folded American flag and a small cedar chest just large enough to house her son’s Purple Heart.

I grew up hearing the story of my Uncle Roy and how he’d been captured by the Japanese in World War II. Even at that early age, I couldn’t imagine anything worse than losing a son. I loved Isabel for the way she loved Roy and how she never gave up. Somehow this made me know that she’d never give up on me either no matter who else might.

“He’s in Japan somewhere,” she’d say. “He just doesn’t know who he is.” Then, with such certainty, “ He’ll come home when he remembers.”

Now that I’ve lost a son of my own, I suspect that’s why the candles burned so brightly. Some days you simply need the light to protect you from the darkness.

I waited, quite certain that one day Uncle Roy would return, grey haired with a slew of kids behind him, and I’d go to school the next morning bragging that I had cousins who were Japanese. But, it never happened. Uncle Roy never returned.

I suspect that Isabel always knew this. Still, she held on tightly to her God and her sacred spaces.

I do the same.

So, I’ve got to recreate that sacred space. You see, I used to have this wonderful little corner on yet a different couch, this one in my living room. I would get up early, make a cup of tea, switch on the lamp, grab my Bible, and I was immediately transported to this space where I could just be with God. It was like He was there waiting for me to arrive.

We sold that couch so I tried the chair in my home office. It didn’t work, my mind so distracted by emails still unread. That corner of the family room couch doesn’t work either because, you guessed it, I fall asleep. The kitchen table doesn’t cut it because my husband will inevitably wander in to get coffee, and the next thing I know, we’re full into the details of our day. God says, forget about it, and leaves the building.

It’s a silly problem to have, right? People in one room houses with dirt floors find a sacred space to pray, why can’t I?

Here’s what I know. I have conditioned my mind, body, and spirit to quiet when I have a physical location designated as a sacred space. I can pray anywhere, and often do, but to be truly present with God, like Moses, I have to isolate myself on that mountain and just be.

So, here’s my plan. A chair, a lamp, my Bible, a cup of tea—all in my son’s old room. I don’t go in there much since Michael’s passing, and I frankly don’t know why. It’s quiet, serene, and I just happen to believe that Michael and God hung out there quite a bit during Michael’s final days.

One candle. One picture of Michael. One God. One sacred space, and I’m good. Isabel would be proud.