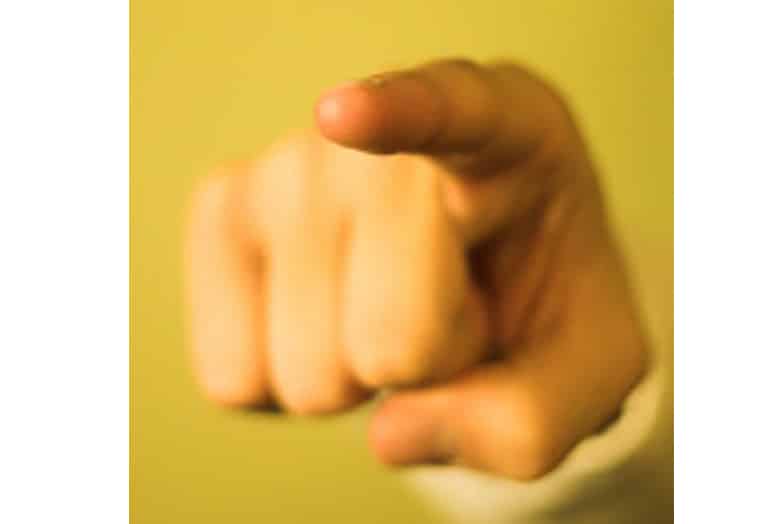 Let’s be honest.  Sometimes it’s just easier to blame someone else when things don’t go our way.   Maybe we’re hurt, angry, or frustrated, and for whatever reason, pointing the finger at someone else makes us feel better about the situation.  Maybe even better about ourselves.  At least temporarily.

I think back to a number of years ago when someone on my team really disappointed me.  At the time, it actually felt more like betrayal.  I experienced all those emotions that most of us succumb to when we’re smack in the middle of brokenness.  I remember being so hurt and angry that I could hardly focus on much else.  I replayed the tapes in my head over and over again trying to understand how this could have happened.  Why didn’t I see this coming?

One early morning, 3:00 a.m., to be exact, I was jolted from a sound sleep.  As the anger once again bubbled up in my mind, I felt compelled to do a Biblical word search on forgiveness.  God has such a great sense of humor because, of course, I stumbled upon a passage in Romans 12:14-21 which emphasized the importance of blessing those who persecute you.  Something about overcoming evil with good, maybe even offering your enemy a gift in good faith.

I heard myself chuckle as I softly challenged God’s Word out loud:  You’ve got to be kidding.

As you might imagine, I didn’t jump on this idea too quickly.  As the day wore on, however, it became apparent to me that if I was going to move to a place of forgiveness, I’d have to offer that gift.   In order to do so, I’d have to focus on the goodness of this person.  I actually sat down and made a list of qualities that I admired and respected.

In that process, something amazing happened.  I began to shift off of blame to a place of responsibility.   In taking on responsibility for what had happened, I began to experience a tremendous sense of freedom.

The Experience of Greater Joy:  When you lose the anger at someone else, you begin to focus on the positives of that experience.  And, yes, even the negatives can be transformed into positives if you look at them from a learning perspective.  When our world is clouded by anger, we miss the joy and majesty of the moment.  Think about it.  Does it really make sense to let this person who has already hurt you, rob you of those moments?

There’s nothing wrong with being in anger—for a while.  Anger gives you energy to get through the trauma.  However, you’ve then got to make sense of the experience, and let it go.

Author Annie Lamont says it best.  Being angry is like eating the rat poison and expecting the rat to die.  Think about it.

Greater Self-Understanding:  Once my thinking was no longer clouded by anger, I was able to clearly see where, when, and how I had unwittingly facilitated the betrayal.  The root of that understanding was pride.  I knew when I hired this person that she had issues.  I hired her anyway.  Why?  Because in my pride, I thought I could help her change behaviors.  Once I realized this tendency within myself, I was able to take responsibility for at least some of the the outcomes.

Ability to Forgive Yourself and Others:  When you’re stuck on anger and blame, it’s impossible to take responsibility.  Taking on responsibility allows you to forgive.  Are you noting the cycle here? I’m not necessarily saying that you have to resume a relationship that is harmful to you.  Forgiveness is a matter of the heart.  If reconciliation is part of the process, that’s the good news.  But, if the relationship is an unhealthy one, forgiveness allows you to move on absent regret and resentment.

Smarter Choices: Finally, this shift from blame to responsibility allows you to be more discerning the next time around.  If you’ve ever watched someone (self included) repeat the same mistakes over and over again and wondered why, it’s because we get stuck on stupid.  We fail to fully engage in this process of discovery.  You’ve got to be willing to do the work.  It’s not easy.  It’s not fun.  It is necessary.

The process goes something like this:  lose, blame, learn, forgive, love, maybe even forget.