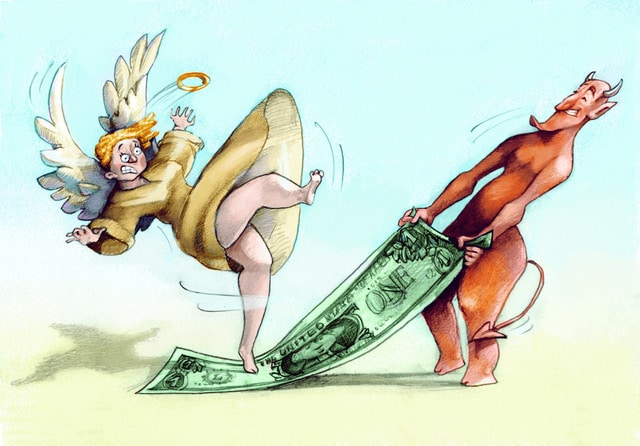 Is Money Good or Evil?

When I wrote the Pursuit of Time and Money, my intention was to offer some insight into the spectrum between scarcity and abundance. I wanted to learn more about how people experience the two most important resources of time and money.

In the early research for the book, I learned that a lot of people have really strong beliefs about money. Some view it as the root of all evil. Others view it as a way to do good things in the world. Others view it as neutral. Some pay no attention to money at all. It’s just something they tolerate.

In exploring what others believed about money, I was forced to examine my own beliefs.

I’m sure you’ve heard the old adage, “We teach that which we need to learn.”  In my work involving systems dynamics, I’ve had to face some of my own money demons. . . demons like guilt and shame . . . and you guessed it . . . those demons are rooted in my family system and have been for generations.

Ouch! Just when you think you’ve escaped the shadows of your upbringing, right?

The Stuff We Learn as Children

Every family system has rules and myths. It’s all the stuff we follow, stories that date back to generations past. I was brought up in the Catholic tradition. I’m grateful for the beautiful rituals of that tradition and many of the values that I still hold dear are a result of those early experiences.

The belief that money or wealth is good wasn’t one of them.

One of the earliest stories I remember hearing was directly linked to the Pharisees. If you don’t have a framework for the Pharisees, these were the wealthy guys who showed up as quite pretentious in the Bible. They observed all the laws and traditions of Judaism but were viewed by many as hypocrites. And, oh, by the way, they killed Jesus.

Whether the story was actually positioned this way or not, I’m not sure. How I internalized it was that wealthy people killed Jesus, therefore, wealthy people are the bad guys. You definitely don’t want to be like them.

Family myth: Avoid wealth as only bad people are wealthy.

While we didn’t necessarily have a lot of money, I never felt poor growing up except when my mother would compare our lives to those who had more.

“That’s for rich people,” she’d remark. Then, I wondered. Why do they have more than we do? And, in that wondering, I made a decision to do it differently. It wasn’t that I set out to make a lot of money. No, I never went that far, but I did decide to have a better life.

Family myths stay with us. They haunt us (see how I made the connection to Halloween here?). Yes, they rise up from the dead when you least expect them. You think you’re past all the rules and myths of the family until, well, one day, you’re not.

That day hit me a few months ago when I realized that I still carry incredible guilt over the success and good fortune my husband and I have created, and, yes, I stress the word created.

The source of this guilt is directly linked to the fact that my mother and my younger sister were not as blessed as I’ve been. It’s a fact of life that’s rooted more in choices they made, or couldn’t make, along the way. No one’s right or wrong in this scenario. It’s just the dynamic of our family system.

You’ve often heard me state that with the first moment of awareness comes opportunity for change so when this epiphany hit me across the brow like a 2×4 moving sideways, the first place I went was in search of how this hidden family dynamic had impacted my life.

Let me just say that it hasn’t always been pretty, but I’ve had a dramatic shift in how I think about money and wealth since this awakening. I share this with you now in the hopes it might help you break through any self-sabotaging efforts that are causing you undue stress, anxiety, fear, or pain.

One of the things I’ve learned is that lack of anything, to include money or wealth, only creates more lack. The result is behaviors of scarcity in our lives and in our society that manifest as greed, thievery, unhealthy competition, addiction, low self-esteem, failure to thrive, and ultimately chaos.

Scarcity, in whatever form it takes, creates more scarcity. Such negative elements in any system will only serve to throw it off balance. The result is unnecessary effort, strife, and struggle.

So, it’s been in my family.

Repeat after me: Wealth is a good thing.

It’s a good thing because when we build wealth with integrity and purpose, we not only grow personally, we create space for others to flourish and thrive. We contribute to a greater society, a more robust world. A mindset of abundance creates rather than destroys.

What do you believe about money? Is it good, evil, or something you tolerate? How is that belief framing your life right now? Something to think about as you explore your own money demons.