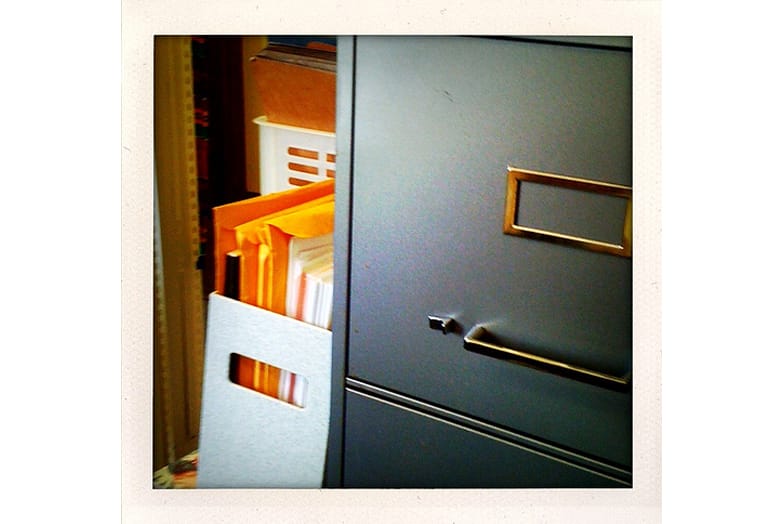 If you’ve been living with loss of a loved one, you’ve probably discovered that it’s a process. I’ve been in this process for almost six years now, and I’m still amazed by the things I keep learning. Like just yesterday.

I was rummaging through the closet in my home office. The mission was to scan and toss all the old files that are no longer relevant. And, then it happened. There before me, several large folders filled with yet more of my son’s medical records.

When you have a child with a disability, you save everything because you never know when a doctor, psychologist, therapist, or even lawyer is going to ask you for a date, time, or diagnosis. We have mounds of paperwork that represent Michael’s journey.

I take a quick glance through the first record, and quickly snap the folder shut.

Moments later, I stumble across Michael’s fifth grade notebook filled with stories we had created together. Another snap, and it’s closed.

I’m just not prepared to look through these now. Today, I’m focused on letting go, cleaning out.

My husband stands and stares, trash bag in hand. “These are Mike’s,” I say. “What should we do with them?”

“Well, you can’t throw them out. Let’s put them in the box of things to be stored,” he responds without hesitation.

It occurs to me in this moment that we are, all at once, at different and yet similar places within this process of healing. And, without even being fully aware of it, we still cling to certain rituals that keep us grounded in who Michael was, and who he still is in our lives.

We’re all familiar with the obvious rituals of loss. In those first moments and days after someone passes, we engage in rituals that help us get one step closer to acceptance.

These rituals are often linked to our family history, religious beliefs, and societal norms. It’s the planning of the memorial service, the flowers, the gathering of family and friends. Whatever the tradition, these rituals help bring us collectively together to begin the healing process and to remember.

After this initial phase, however, there is a second wave of rituals which are unique to the individual.

In the early days after Michael’s passing, for example, I rose early each morning, gathered up my Bible and morning cup of tea, and settled into a big leather chair in my office to pray and reflect. Often I spent time with Michael via journaling. A simple letter to my son somehow made me feel connected.

Most often, these early rituals evaporate over time, and I find that those of us left behind move on to new ones or we come to avoid them altogether.

Grief counselor Kala Helbert speaks to rituals as purposeful actions that symbolize something more than the acts themselves. Our rituals represents our beliefs about death. She further reminds us that “rituals provide structure, meaning, and connectedness. . . they allow us to move through grief in a safe way.”

My husband, for example, still lives out his role as a very hands-on-dad by meticulously caring for Michael’s gravesite. His love, respect, and loyalty for Michael is now expressed via weekly trips to the cemetery to make certain that our son’s “sacred space” is brushed clean and free of encroaching weeds.

Rituals, it seems, are different for each of us. I’ve come to the conclusion that we learn to live with loss by embracing two very important rituals of the life/death experience: Story and Stuff.

Whereas my husband has rituals associated with his role as caregiver, I have a need for story. I was, after all, not only Michael’s mom, but his advocate.

Since I’ve spent most of my life advocating for people with disabilities, Michael’s story is one I’ve often shared. To end the story now would be unnatural for me. Michael may have left the building, but his story helps me keep the joy of him alive.

Here’s what I find interesting. Whenever I move into a funny anecdote about Michael, people often don’t know how to respond. They stop and stare. There’s usually an awkward silence. If they knew Michael, they might offer a comment or so, but then, they quickly move on.

One of the things I think people fear after losing a loved one is that the person will be forgotten. Story helps bridge that gap between what was, what is, and what will forever be.

For some of us, however, story may not be a ritual. It may bring up too many painful memories. I know, for instance, that I never have a desire to speak much about Michael’s last days of suffering. As for the rest of our joyous life together, I fully appreciate recounting those memories. More importantly, I am grateful to those who listen.

This ritual is a bit more complicated than the ritual of story. In the early days of grief, I went about the business of clearing through Michael’s things.

I repainted and organized his room so as to remove any signs of “hospitalization” or illness. I sorted through clothes and gave away the good stuff to our friend Jonathan. I know now that I was trying to create some new-found order in my otherwise chaotic life, but it felt right and good to do so.

So, why then, am I clinging to every last piece of paper that hosts Michael’s name?

Insurance claims, educational plans, hospital records, letters from countless doctors, blood workups, neuromuscular biopsy reports, and on the list goes. Why is it easier to cleanse the house of personal effects and yet so hard to relinquish these now useless pieces of paper?

This is what I’ve discovered. These mounds of paperwork represent all our years of hard work, all our effort in getting Michael the best possible care, the best education, the best wheelchair, nutrition, you name it.

If I throw away these most intimate details of our life together, it’s as though he never existed, and I’m not ready to let go of even one bit of evidence that he was here and that his life mattered.

The rituals associated with stuff, then, are perhaps the most challenging. They’re challenging because they surprise us. One moment you’re cleaning out a closet, and the next minute you’re hit with the reality that someone you love is gone, and he’s never coming back.

My thoughts sting. I don’t need to save these papers, because I will never, ever again stand before a doctor or some other professional fighting for my son to have what he needs. I will never need this supporting documentation again. The fight is over.

Even as I embrace this reality, I’m still not ready to let these documents go, and I’ve decided, it’s okay. I don’t have to make this decision now. I can hang on to these remnants of Michael until I decide to do otherwise.

Someday, I’ll be cleaning out the garage, and I’ll come across a sealed plastic box. Maybe on that day I will have the strength and energy to read through that mountain of documents. And, on that day, maybe I’ll be able to toss them out.

But, not today. Not yet. Today, Michael’s stuff remains packed away, a reminder that he fought the hard battle and finished the race as a warrior against all fear.