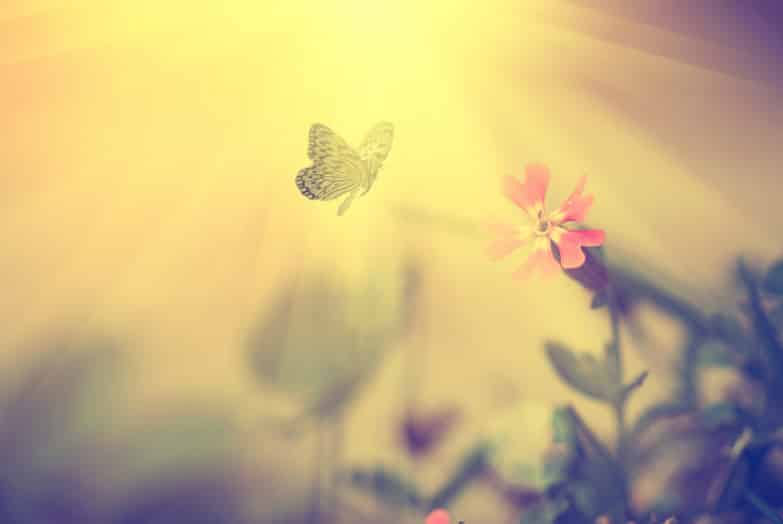 If you haven’t hit those in-between spaces of life yet, be prepared. These spaces can be exhilarating or they can be painful. The good news is, you get to decide.

Think of it this way. You’re climbing a “Jack-in-the-Beanstalk” ladder to somewhere unknown. You’re up beyond the clouds. You’ve got your right foot firmly planted on the rung below you, and just as you begin to lift your left up onto the next rung, the ladder begins to swing and shake.

Without warning, you’ve lost your balance, and you are suddenly suspended in mid-air. As you start to fall, you grab tightly to the ladder. For a moment you are stable, then grateful, then scared, then overwhelmed, and the emotions keep flooding in: uncertainty, doubt, anxiety, now terror.

Do you continue the climb? Or do you make your way downward and return to the safety of  solid ground?

What I’ve just described is what I call an in-between space. It’s a time in life when you’re torn between what used to be, what is, and what is yet unknown.

Again, the good news is, you get to choose. The bad news is, we often don’t. Sometimes we just plant our feet on the ladder and hang on. It’s called survival, and it’s far less exciting than being in midair.

I was reminded of the awkwardness of those in-between spaces just yesterday. The ultimate in-between space of all, that unsettling space wherein life and death collide. It’s the one we don’t want to talk about. It’s also the one certain space we’re all destined to experience.

Beyond the awkwardness, however, there is the sacredness of those final moments. I recalled this when a friend sent me a compilation of blog posts written by a man God called Don.

You see, Don was one of those people you only had to meet once to never forget.

After receiving a diagnosis of cancer, Don chose to embrace his in-between space. At the age of 70-something, he reached out to family and friends and started writing blog posts. With one foot on the ladder and the other in mid-air, Don focused on the legacy of dying well.

His last entry was posted thirty days before his passing and that compilation of posts, now entitled, Leaving a Legacy by Dying Well, is in the process of being published. I was honored to receive a copy yesterday afternoon, and as I briefly leafed through the final pages, I witnessed a poignant glimpse into the heart and soul of man who loved God, a man who never stopped loving Him even in his last hours. In fact, I will make a bold assumption that Don, being Don, came to love Him more as he embraced his own mortality.

In teaching those around him how to die well, Don also taught us all how to live well.

I suspect that few of us will ever come to think of how we want to live out that in-between space between life and death the way Don did. Even so, we find ourselves caught between two worlds more times that we come to realize. It’s rarely comfortable. Transformation never is.

Those in-between spaces are really a form of adventure if you care to think of it that way. That is the point, really. To embrace the adventure. That’s what Don did. With one foot solidly placed on the ladder toward heaven, and one foot dangling in midair somewhere between life and death, he embraced the instability. He trusted in God.

Don chose to die well. It’s the ultimate choice we have, is it not? And, I love the idea of having choice even in our final hours.

But, why wait. Why not embrace our choice now? Why not embrace those in-between spaces today and every day? Think of the adventure. Imagine the possibilities of each day.

So, you’re halfway between where you used to be and where you’re supposed to go? What now? What do you do, when the “next”is uncertain?

The Transition is Part of the Journey

You get to repeat adolescence over and over again. I’m sorry to be the bearer of bad news, but you do. You simply must.

Think of it this way. I remember when my son Michael was in his early adolescent years. He wanted to dress cool, his voice was beginning to change. I could no longer kiss him in public, yet on some days, he’d return home from school, and I’d find him in his room somewhere in between his computer and messing with his collection of trucks.

When you’re in those in-between spaces of life, it can feel like you’re two people. You may want to move, change jobs, get new friends, abandon old ones. You sense a change, and the tendency is to either deny it or force it to happen.

A Warning! Beware of Sudden Moves

Whatever you do, don’t dye your hair like I did one year when I thought it would be more interesting to have auburn hair over blond. I said, “auburn,”really I did, and I walked out with plum, and it was an in-between space that caused most of my friends and colleagues to stop, stare, and wonder, is Sharon having a breakdown?

It took weeks to get that color out. Talk about awkward in-between spaces. When you walk through the door, and your husband says, ‘What have you done,” you know you’ve gone too far.

So, no sudden dramatic actions, please. In-between spaces require patience, prayer, and a great amount of solitude. It is wise to wait and let the space unfold.

My colleague and mentor Terri O’Fallon talks about these in-between spaces as a sort of rocking back and forth. We’re growing in one direction, rocking forward, even as we’re rocking backward, in our longing to be who we once were.

You’re on the path to somewhere unknown. It’s awkward. It’s messy. It may even be painful. You don’t know how to get there or how you’ll know when you arrive.

It’s the good news. But, there’s a great big secret to being in that in-between space.

Are you listening? Draw a bit closer so that I can whisper in your ear. Listen. Listen well.

That’s it. It’s that simple. Go on about your daily business, but just be. Embrace these precious moments.

If you resist the in-between space, your resistance will blind you to the growth. You will miss it.

A butterfly doesn’t fight to stay IN the cocoon. Rather, it releases itself to the experience of the struggle such that it grows stronger. You know the story. It’s being IN the struggle and fully submitting to it that allows the butterfly to birth new wings. Then, and only then, is it able to fly. It’s the struggle that produces freedom.

So it is with us.

When we are in those in-between spaces of life—whether it be loss of a job, a divorce, loss of a loved one, or even just our own personal growth, our feet somewhere between two rungs on the ladder of life, yes, it’s awkward, messy, maybe even painful. Like Don, however, we get to choose our own response.

We want to believe we’re all grown-up.  We’re done. We’re complete. But life continues to offer up new challenges. And, by the way, being grown-up isn’t the same thing as waking up.

Some grown-ups never want to wake up. Waking up takes effort. It takes work. It means I have to pay attention to who I am, what I’m thinking, and the impact I’m having, or not having, on others.

To stay asleep may seem easier, but in the end, it equates to a boring, often time meaningless experience of life. You’re on that ladder, but you’re afraid to look up, and you don’t know how to get down. You’re simply stuck, hanging on for dear life. You may be surviving, but just barely.

In-between spaces are glorious, no doubt. Just go for it. Look up. Put that next foot forward. Be present in the moment. Wake up. Embrace all that God has designed you to be. Trust in what’s next.

Or, as the ancient Scriptures say, and I’m sure Don would agree, Be Still and Know that I am God.