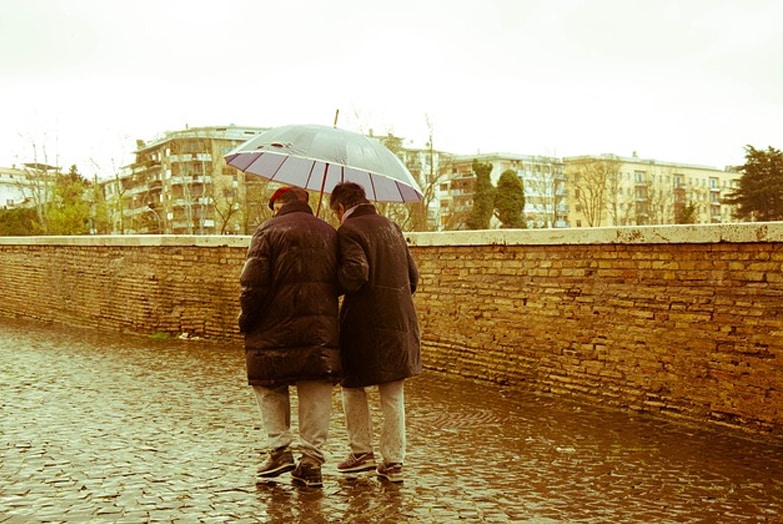 Baby Boomers seem to be sitting on the fence these days. Seems like everywhere I turn, the question pops up: to retire or not to retire?

The camp seems to be divided:

I love to hang out with people in the third group because they are fun, exciting, and they make things happen. However, I know people in all three places, and, frankly, it’s a dilemma not easily solved.

Sometimes, you just get lucky enough to have someone enter your life in a most unexpected place, and the answer to such a hard question actually becomes quite obvious.

I was recently blessed by two such people.

A Message from an Unlikely Stranger

Here’s the scene. My husband and I are sitting in this amazing restaurant in Lake Lucern, Switzerland. (Yes, I know, but someone has to do it). Opus is everything I could have imagined a Swiss restaurant to be. Tight warm corners basking in candlelight, white table clothes, and all the wine and Bouillabaisse one could hope to ingest.

The atmosphere is so divine, I feel as though I’ve been transported into the heavens. Retirement isn’t exactly the topic on my mind; I’m too busy living.

As the waiter pours the wine, however, I’m daydreaming about what it would be like to simply drop out. I could convince Ralph that we should sell everything and rent a little apartment in the Swiss Alps. “Why wasn’t I born Swiss,” I think to myself?

Suddenly, a couple in their 80’s enters the restaurant. The waiter graciously motions them to the table next to us. The seating is tight, the tables so close, it’s almost as though we are one party. We politely say hello, and the man begins to chat.

Seems we’ve both come off the same Uniworld cruise of the Rhine. My husband recognizes both Al and Sophie. They are apparently American world travelers with a myriad of perspectives on history, culture, and gastronomic delights.

As the conversation continues, we come to learn that Al was formerly with the National Institute of Health, and, Sophie, a fellow physician, has focused her career on stem cell research. They have been married, well, forever.

With a thousand questions bubbling up in my mind, I’m immediately drawn in. They tell us about their four children and how they, too, are all doctors. As the story unfolds, I become more and more entranced by all that they have accomplished.

What an interesting couple, I think to myself. How lovely to be retired and travel the world.

Al suggests that we take the train to Interlachen in the morning. The conversation switches to the topic of Germany.

“Really,” I respond trying not to act surprised.

“You were here, then, in Europe, during the war?”

“Yes. My parents were killed in one of the camps. My father made an arrangement with a Frenchman and somehow got me out. I was then shipped to the United States where I met Sophie, and I’ve been there ever since.”

He makes it all sound so effortless, so matter-a-fact, as though it’s perfectly normal that a boy of 14 should be stripped from his parents and carted halfway ‘round the world. I try not to act as dumbfounded as I am. The reality that I’m sitting here, in this very moment, with a man who actually survived Nazi Germany is beyond my imagination.

With the casualness of someone who knows he can survive anything, Al offers up a few more details as though he’s recanting the plot of the latest Nazi movie. He makes a skilled and practiced transition to the weather seemingly oblivious to the stir he’s caused within us.

I want to hear more, but dare not ask. The moment has passed. Yet, somehow I know I am deeply changed by this man.

“Oh, we’re not retired. We do consulting work now all over the world. There’s still a great amount of work to be done. When you retire, you become uninterested and uninteresting,” he adds, eyes glistening.

Baby Boomers, now there’s something to think about. Maybe it’s time to reinvent the conversation on retirement. Maybe the question should shift from retirement to how and where can I still contribute to the greater good?

Q: Think about what more you have to offer. What are your thoughts on retirement? [reminder]